A downloadable game for Windows and macOS

The second game I made years ago, after Midnight Asylum. I was experimenting with things, so sorry if it's messy. It's pretty much a lone project I did for fun.

I left the protagonist's dialogues blank, so you can figure out in your head what he's saying... Or laugh at the fact that he's somehow communicating with everyone telepathically ^^"

Game Difficulty: What the heck is this? Even the creator hasn't played through and finished it yet??

You play as a guy named Gene, whose soul is destined to ascend to heaven.

Sike! Apparently he's done some horrible stuff in his life that he has to head straight to hell.

Luckily, the Devil has decided to give him an opportunity to atone for his sins by living an honest life... Somehow.

Now in hell, he can choose to lead his life in three ways: by living honestly, becoming a thief, or overtaking hell itself!

In the game, you may meet different characters with different attitudes in life, from the relaxed shopkeeper, to the shady mysterious figures lurking around.

It is important to manage the amount of money you have, and raising your stats can help make things easier for you.

And remember: if you're desperate for time and energy, you can always rely on coffee! ☕️ 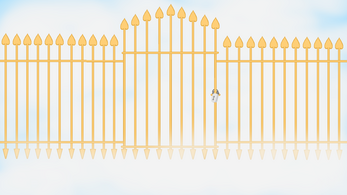